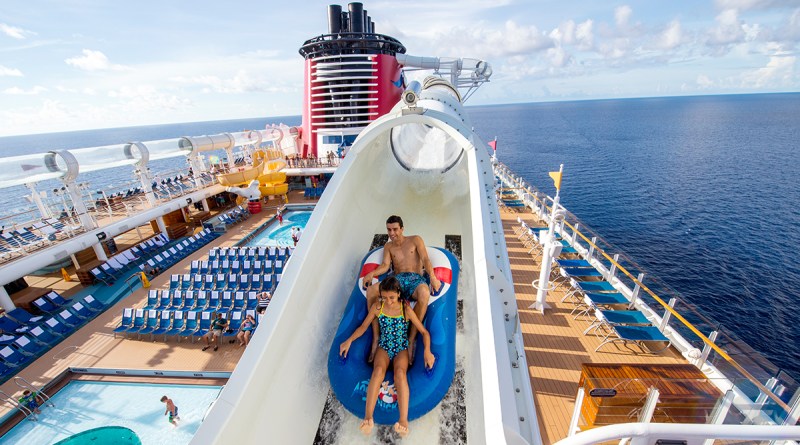 When Disney Cruise Line entered the cruise business in 1998, they made cruising a genuine “family” experience. Until that point, most cruise lines focused mostly on adults, with very little consideration (in services or offerings) given to younger family members. The Disney Magic launched in July of 1998 and redefined the cruise industry and its impact over the years has been evident.

And while we’re on the subject of children, Disney built its cruise ships with kids in mind – from the “it’s a small world” Nurseries (for toddlers) to the Oceaneer Club (for kids 3-7), Oceaneer Lab (kids 8-12), Edge (tweens 11-14) and Vibe – the ‘teens only’ hangouts, a Disney cruise has the younger set fully covered. The industry followed suit with newer ships on cruise lines such as Carnival and Royal Caribbean, trying to ‘up the ante’ regarding kid-specific areas. The fact is that in the family market, anyone else is simply vying for second place.

Your favorite Disney Characters will appear throughout the entire cruise; even the Disney Cruise ship’s horn gets in the spirit. Almost everything is included on the Disney Cruise Line: meals, entertainment, snacks, and room service. They’ve thought of it all when it comes to experiencing a cruise with those special Disney touches.

Years ago, at the 2017 D23 Expo, Disney Cruise Line announced they would add three new ships to their fleet. They said that the new ships would be added in 2022, 2023, and 2024 respectively, and would all be the same size, roughly 135,000 gross tons, hosting around 1,250 guest staterooms. The new ships would be powered by “clean-burning liquefied natural gas,” but size and fuel are where the similarities end. Each vessel will have individual one-of-a-kind experiences.

The first of the new ships is named the Disney Wish and it set sail on its maiden voyage on July 14, 2022. The two additional ships will join the fleet in 2024 and 2025, respectively, but those approximate dates are subject to change.

Click Here for more information on the Disney Wish

The Disney Dream set sail on her maiden voyage on January 26, 2011. The Disney Dream is 40% larger than the Disney Magic and Disney Wonder, with two additional decks and 1,250 staterooms. Each Inside stateroom has a “virtual” porthole showing rolling waves and Disney characters swimming by all in HD. One of the most popular features is the first-ever water roller coaster at sea – the Aqua Duck is 250 yards of transparent tubing that sends guests soaring over the top decks and at one point – over the ocean!

The Disney Dream offers the latest designs in contemporary staterooms, elegant restaurants, and fabulous entertainment. In addition to the kids’ clubs, there are nightclubs and lounges, as well as theaters for movies and live shows.

Set sail aboard the Disney Dream for ports of call in the Bahamas and Castaway Cay (Disney’s private island). The Dream’s shorter Disney cruises are a particularly good choice for those cruising for the first time. Many guests are concerned about how well they will fare at sea. These shorter cruises give them a chance to experience a Disney Cruise vacation and often lead to a “repeat” cruise on a longer itinerary.

Click Here for more information on the Disney Dream

The Disney Fantasy is the fourth ship in the Disney Cruise Line fleet and sailed her maiden voyage on March 31, 2012. A sister ship to the Disney Dream, the Disney Fantasy features an AquaDuck water coaster, magical children’s areas, world-class entertainment, delightful dining, retreats for adults, and immersive experiences for guests of all ages with beloved Disney stories and characters. This massive ship features 14 decks and has 1,250 staterooms. As guests have come to expect from Disney Cruise Line, the newest ship combines state-of-the-art technology with the elegance and grandeur of old-time ocean liners. Every Disney Cruise Line ship has a signature character; the Fantasy is no different. The ship’s atrium is home to a bronze statue of Mademoiselle Minnie Mouse. Keeping in line with the vintage travel theme seen around the ship, Minnie is dressed in fashions from the 1920s and 30s, complete with a parasol and steamer trunk.

Click Here for more information on the Disney Fantasy

Known as one of the “classic” ships, the Disney Magic is similar to its sister ship, the Disney Wonder. The Disney Magic offers a wide variety of itineraries, mainly sailing to the Caribbean, but the Magic also heads off to ports in the Bahamas, Canada, New York, and Europe!

Click Here for more information on the Disney Magic

Another “classic” ship, the Disney Wonder is every bit as elegant as its newer counterparts. Guests on the Disney Wonder will enjoy great food, entertainment, and recreational activities. Kids will keep busy in the Oceaneer Club and Oceaneer Lab, while tweens can hang out in Edge and teens will find their own space at Vibe!

The Disney Wonder sails to a wide variety of destinations, such as Eastern and Western Caribbean itineraries, Alaska and the Pacific Coast, Hawaii, and even the Panama Canal! In addition to these destinations, the Wonder will set sail on 7-night itineraries to the Mexican Riviera, visiting such ports of call as Puerta Vallarta and Cabo San Lucas!

Click Here for more information on the Disney Wonder