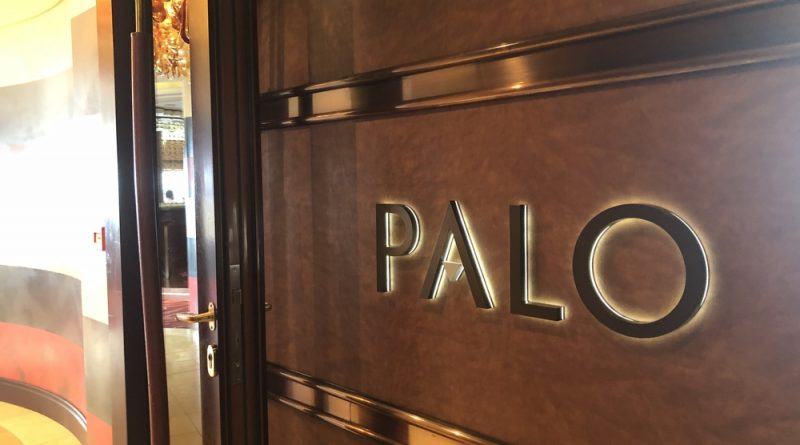 Disney Cruise Line offers two adult-only dining experiences for its guests: Palo and Remy. Palo offers Italian-inspired dishes, and is featured on all four of the DCL ships. Remy, highlighting both a French menu and an American menu, is only offered on the Disney Dream and Disney Fantasy. On our recent Disney Dream sailing, we had the opportunity to dine in both establishments. Today’s review will focus on the first: a dinner at Palo.

A Palo reservation can be hard to come by as guests with a future Disney Cruise Line reservation can request one when completing their online check-in. Guests dining at Palo must be at least 18 years old, and guests who have achieved Platinum status (10 or more cruises completed) receive a complimentary meal in Palo during their cruise. That being said, if you board the ship without a Palo reservation, be sure to go to the dining change location (ask a crew member on the day of embarkation, and they’ll point you in the right direction), and request a reservation. It’s always worth a shot. I’ve heard over the years that a certain number of reservations are held open for guests who request one on the day of sailing.

While Palo can be found on all four Disney Cruise Line ships, the space itself looks quite different on the classic ships (the Disney Magic and Wonder) as it does on the newer ships (the Disney Dream and Fantasy).

On the classic ships (pictured above), Palo is an open area clad in warm colors. The atmosphere is just a bit more casual and familial. The meal seems to be more of a shared experience among those dining.

Palo on the newer ships takes a bit of a baroque leaning toward Italian influence. The entrance to the restaurants features a stunning glass lighting installation inspired by the shape of pasta.

The walls are clad in deep, rich jewel tones and the artwork showcases the poles so integral to gondolas, for which the restaurant is named.

The space, in my opinion, is less of a shared experience among the room of diners. This is a much different take on Palo compared to what is offered on the classic ships. Not better, not worse; just different. Knowing this ahead of time might help frame your dining experience.

Pete, Sean, Madeline (Pete’s mom) and I had the opportunity to dine in Palo on the third night of our cruise. When guests have a reservation in either Palo or Remy, their rotational dining location serving team is notified. Guests with a reservation simply go to Palo or Remy at their appointed time.

We were greeted by the Palo staff, and escorted to a lovely table set in a domed alcove. The acoustics of the domed ceiling above us made it possible for those on one side of the table to hear those on the other without effort. It was certainly a nice touch.

Our server, Nicholas, was wonderful, as was the Palo manager, Giuseppe. Both greeted us warmly, and got the evening off to a good start. As we sat and considered our culinary options, Pete mentioned the environment. At that point, I clued in on the difference in atmosphere and environment between Palo on the older ships, and Palo on the newer ones. I can eat anything anywhere; but it was interesting to stop and consider the possible impact of the fancier and more formal atmosphere on my dining experience on that evening.

Just last year, my husband and I had the opportunity to enjoy Palo brunch on the Disney Fantasy. It was simply amazing. The antipasti buffet, the decadent desserts, and the pasta that melted in our mouths made for an incredible meal. This was my first time having a Palo dinner on the newer ships. I’ve enjoyed dinner in Palo on the Disney Magic (as well as afternoon tea), but it was years ago.

To get the meal started, Pete chose two appetizers. He began with the Agnolotti made with Butternut Squash, Buffalo mozzarella, amaretti, sage-brown butter, and basil. Agnolotti resembles small, half-sized ravioli. Pete thought that this dish was outstanding, and felt that it was almost a dessert. The flavor was rich and sweet, and everyone at the table loved it.

Pete’s second appetizer (from La Pasta menu category) was the Ravioli made of veal, rosemary, parmesan, Crimini mushrooms and Barolo wine sauce. Unfortunately, as much as Pete enjoyed the Agnolotti, he did not enjoy the Ravioli. The overall taste of the dish was musty, and mediocre.

For his appetizer, Sean chose the Grilled Portobello Mushroom, Spinach and Polenta. This dish is plant-based, and features roasted shallot sauce, aged balsamic vinegar and crisp parmesan. Sean enjoyed the inclusion of spinach in the dish, and altogether liked the dish very much. The baked parmesan crisp tended to disintegrate, but he thought that this is a great option for vegetarians.

I decided to begin my meal with two appetizers because I thought they both sounded great, and I knew I’d likely have help at the table eating the second one. To start, I chose the Heirloom Tomato Buffalo Mozzarella Caprese made with basil pesto and aged balsamic vinegar. I love a good caprese, and, over the years, I’ve enjoyed making my own for dinner when it’s a low-key “hang at the house” kind of evening. The fresh mozzarella in Palo’s caprese melted in my mouth. The tomatoes were fresh, and were a perfect showcase for the mozzarella. This was a light and fresh option.

My second appetizer was the Fritto di Calamari e Gamberi. This dish features a deep-fried shrimp and calamari with lemon-garlic mayonnaise and marinara dipping sauces. The calamari was light and tender, and the single huge tempura shrimp was tasty. Both the batter and the fry used on the calamari were perfect: not too heavy, and not too light.

During the appetizer service, we were offered an antipasti plate. Being the cheese lovers that we are, Sean and I said we’d love to partake in the antipasti service. A cart was wheeled to the table, and the plate was prepared tableside.

A plate featuring cheese, veggies, and meats for sharing was placed on the table.

For his entrée, Pete chose the Grilled Prime Beef Tenderloin featuring pancetta potato, sautéed spinach, and choice of Barolo wine sauce or gorgonzola cheese sauce. Pete felt that this steak was a higher caliber steak than what is being offered in the main rotational dining rooms, and, while it was good, it was not among the best steaks he’s had. Both of the sauces had an underwhelming flavor, and the Barolo wine sauce had a harsh finish. Pete found that the taste of the sauces was better when he mixed the two together. He mentioned that Palo used to do a really nice red wine reduction, but, unfortunately, it has been removed from the menu.

Pete felt that, given the current higher quality of the main rotational dining rooms, and expectations of this meal in Palo, he was disappointed. We all agreed that our server was excellent.

Pete also felt that the Agnolotti was the highlight of the meal. One portion of the Agnolotti wouldn’t have been enough for an entrée, but it would’ve been better than other dishes he had that evening.

For his entrée, Sean chose the Piquant Dover Sole- fileted tableside. This dish features nut-brown butter, capers, anchovies, sun-dried tomatoes, flat parsley, spinach, carrots, roast thyme potatoes. Sean said that, overall, the Dover sole was great, and was very lightly breaded, not fried. He noted that the dish was not overly fishy tasting, and was quite pleasant and mild.

Sean also chose a second entrée: the Pappardelle. The Pappardelle featured grilled lobster, pappardelle pasta, leeks, salmon caviar, truffle oil, and tarragon cream sauce. This dish was also the choice that I made for my entree. Sean liked the Pappardelle, and liked that the taste wasn’t too overly fishy, but he liked the sole better. I liked that the dish was light, and I thought that the lobster was cooked nicely, though it was somewhat chewy. The salmon caviar was salty and provided a nice contrast to the rest of the dish.

Madeline had the Roasted Free-Range Lemon and Thyme Chicken with roasted baby vegetables, garlic, potatoes, chianti thyme sauce. She thought that both the chicken and the sauce were very good. Overall, she felt that the chicken was moist and flavorful without having to add too much to it.

For dessert, we each chose the Chocolate Soufflé. If you have the chance to enjoy a dinner at Palo, please consider getting this rich and decadent dessert. Be sure to let your server know that you’d like to have the soufflé well in advance as it takes quite a bit of time to prepare.

Everyone at the table enjoyed the soufflé. Upon setting the dessert in front of you, your server will create an indent in the top crust of the soufflé and pour the vanilla and chocolate sauces inside. It pairs very nicely with the vanilla bean ice cream.

If you have the opportunity to dine in Palo, please do. While the group of us felt somewhat underwhelmed by the experience when compared to the main dining rotation locations and the fact that it’s an upcharge, it’s still an experience to be had. Have you visited Palo for dinner? What was your favorite dish, and how did you enjoy your time there?

If you’re in the market to book a Disney cruise, let the DCL experts at Dreams Unlimited Travel help your dream vacation become a reality. Click here to request a free no-obligation quote from Dreams Unlimited today. 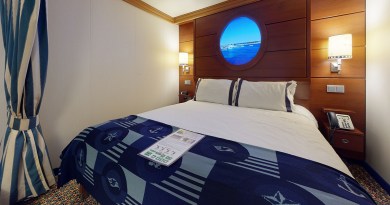 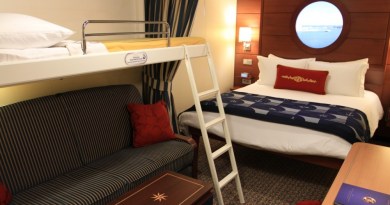 Pros and Cons of an Inside Stateroom on Disney Cruise Line 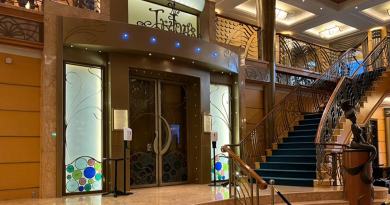